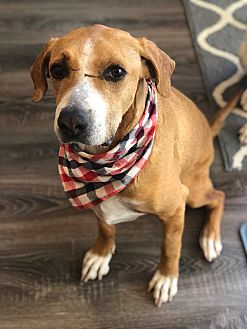 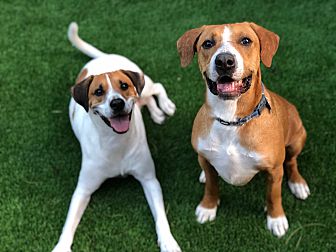 Close Next
Meet Lucky! Lucky has his name because when we got him he was in bad shape and we were told he was lucky to have survived. In late 2018 he was rescued from a trailer in the desert where 35 dogs were crammed together and abused and neglected. The dogs were all malnourished and he still has lots of scars from the abuse. When we adopted him, the foster family had nicknamed him Superman for everything he’d been through.

When Lucky gets to know you and trusts you as his owner, he is the sweetest dog in the world. I’ve never met a more cuddly dog. He loves to snuggle up and nudge you gently with his nose and ask for a head rub. Or roll over on his back until you give him a belly rub. Lucky absolutely LOVES warm weather and spends most of the day in our yard (especially in the hotter months). He is athletic with lots of energy and if you’re up for it, he likes to hike, swim, go on jogs, and play fetch. He’s missing a few teeth from the abuse which gives him the cutest & goofiest smile on the planet. He’s usually pretty good with other dogs but occasionally a very large dog might scare him and make him timid.

Despite all his positives, Lucky needs a very experienced owner because he has PTSD from being abused so badly. Despite being so loving with his owners, he does not do very well with strangers that aren’t a familiar part of the household. When you have guests coming over, you will need to crate him or put him behind a gate, because he is usually aggressive towards strangers that aren’t part of the everyday household. He would be a great companion for someone that doesn’t have house guests very often and would be a good guard dog for someone that’s worried about intruders.

Lucky is about 4 years old and 55 pounds. He’s been neutered and up to date with his vaccines. We'll miss him dearly but our family’s living situation has changed we want him to have the attention that he needs. We are working with another trainer to get him ready for his next family. We now have a baby so we are rehoming him. Please fill out a app at ahome4spot.com